Find out what’s going on at Victoria Mansion and learn more about the collection in these posts and by joining our mail and e-newsletter lists. 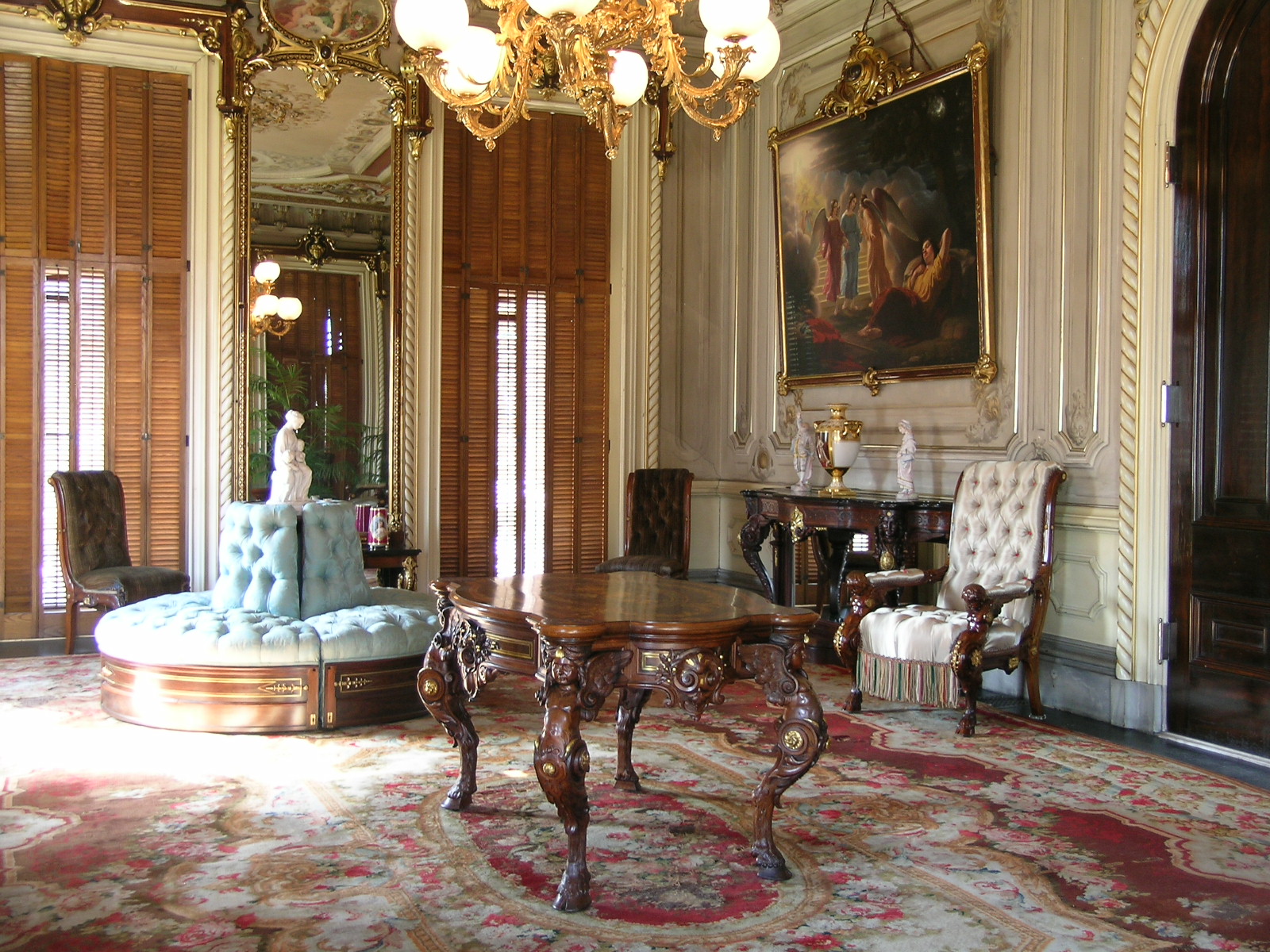 The Bourne Identity: What Was the Ottoman For, and Where Does It Belong? Gallery

The Bourne Identity: What Was the Ottoman For, and Where Does It Belong?

by Victoria Mansion Guide Lisa Schinhofen   Victoria Mansion’s blue circular ottoman is hard to miss — due, in part, to its size and its prominent placement in the middle of a given room — and visitors often remark upon it.   Many recognize the ottoman as a type of public seating, having seen something similar in a hotel lobby, train station, art gallery, or shopping mall. To others, it is familiar as a precursor to today’s sectional sofas.   Some visitors have suggested that the ottoman may have played a role in Victorian courting rituals, as it allowed couples [...] 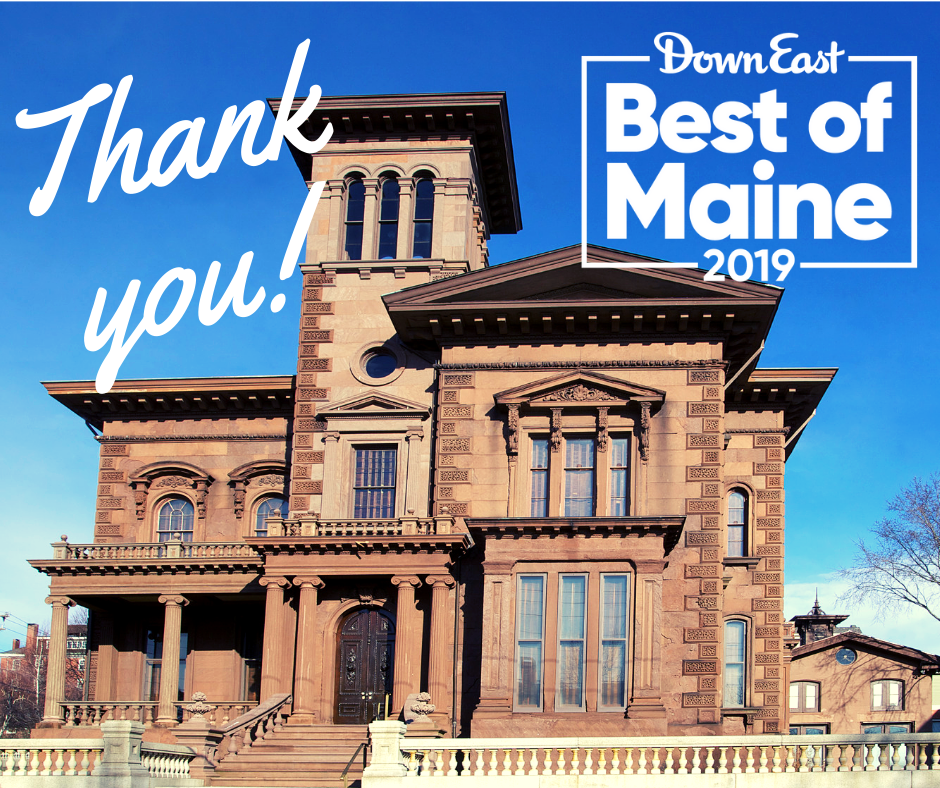 Thank you Down East readers for voting Victoria Mansion as Maine's Best Historic House Museum/ Landmark for 2019! The Mansion is in fantastic company with the Pejepscot Historical Society, the Francis, and the Portland Museum of Art. For a full list of all the fantastic winners, click HERE! 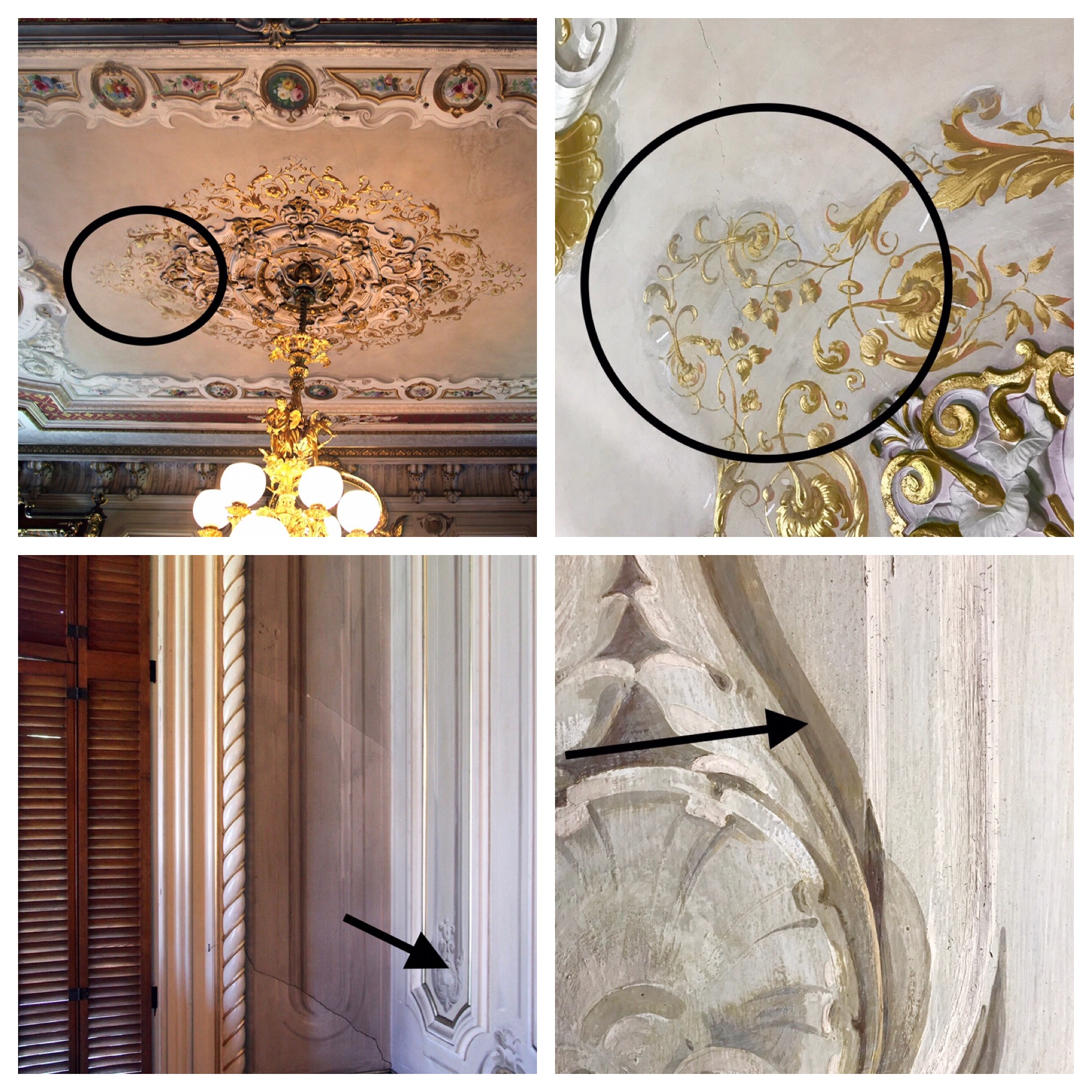 Conservation Update: Layers of Mystery in the Parlor’s Decoration Gallery

Conservation Update: Layers of Mystery in the Parlor’s Decoration

Conservators have nearly completed a "first pass" of cleaning the Parlor's walls and ceiling after re-stabilizing the original paint and gilding. This process presents an impasse for the rest of the project as potential problems may reveal themselves once layers - and over a century's worth - of soot and grime are removed from surfaces. A layer of opaque white paint (very similar to that in the Green Bedroom) has always been visible on the ceiling's north-facing side. The white paint most likely was applied in the 1940s as an attempt to make the "trouble spots" (such as water damage [...] 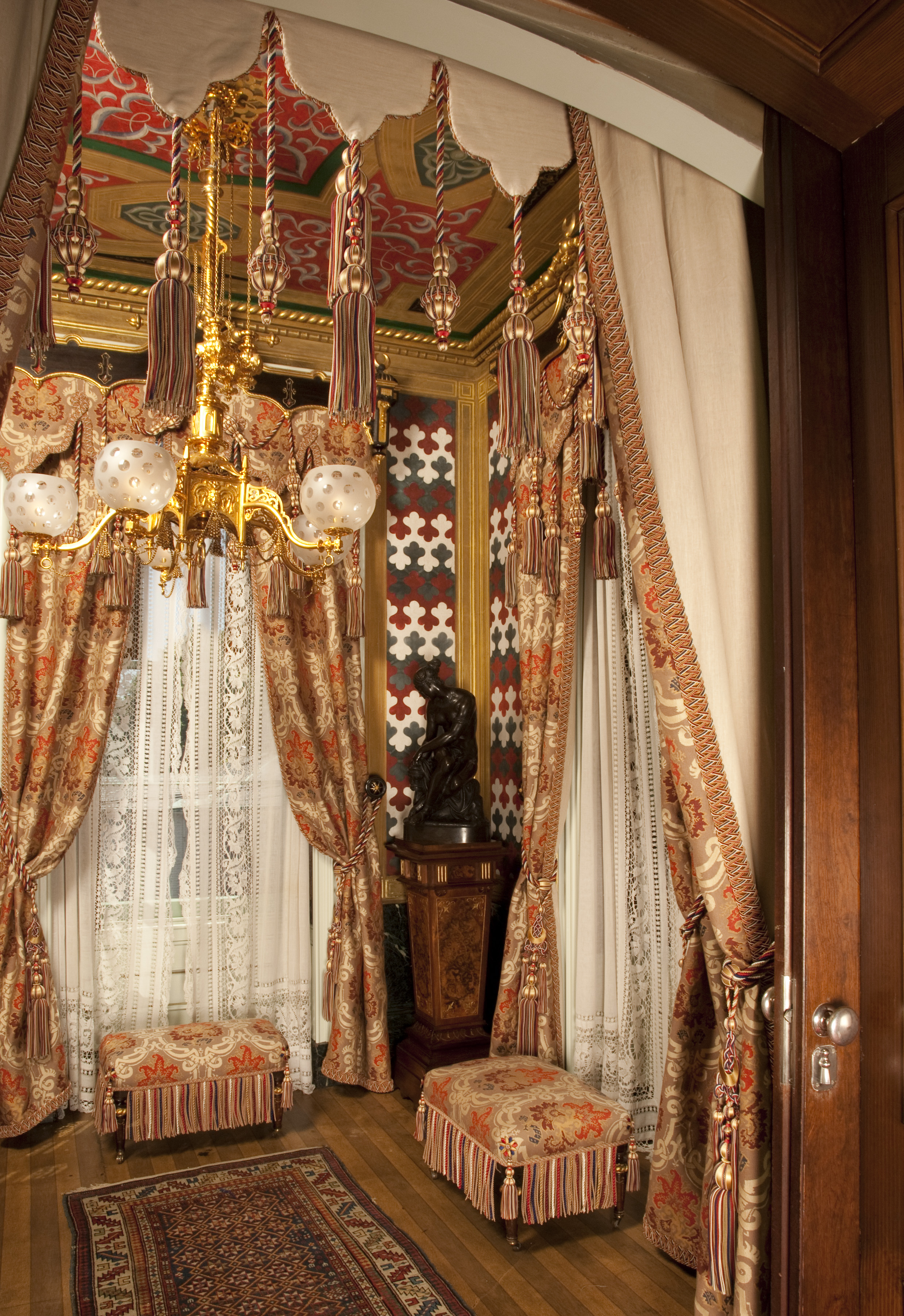 Western culture began defining itself in contrast to the East as early as the Trojan War of Greek versus Persian. In the centuries to follow, as European civilization advanced, its soldiers, traders, adventurers, and artists increasingly perceived the East as a nostalgic counterpart to progress. Across much of the second millennium, Europe conceived of the regions from Egypt to Turkey to India and, eventually, to China and Japan as places to be studied, traveled, occupied, commodified, and poeticized.   After World War Two, as empires fragmented and the new field of postcolonial studies arose, scholars in both hemispheres gave a [...] 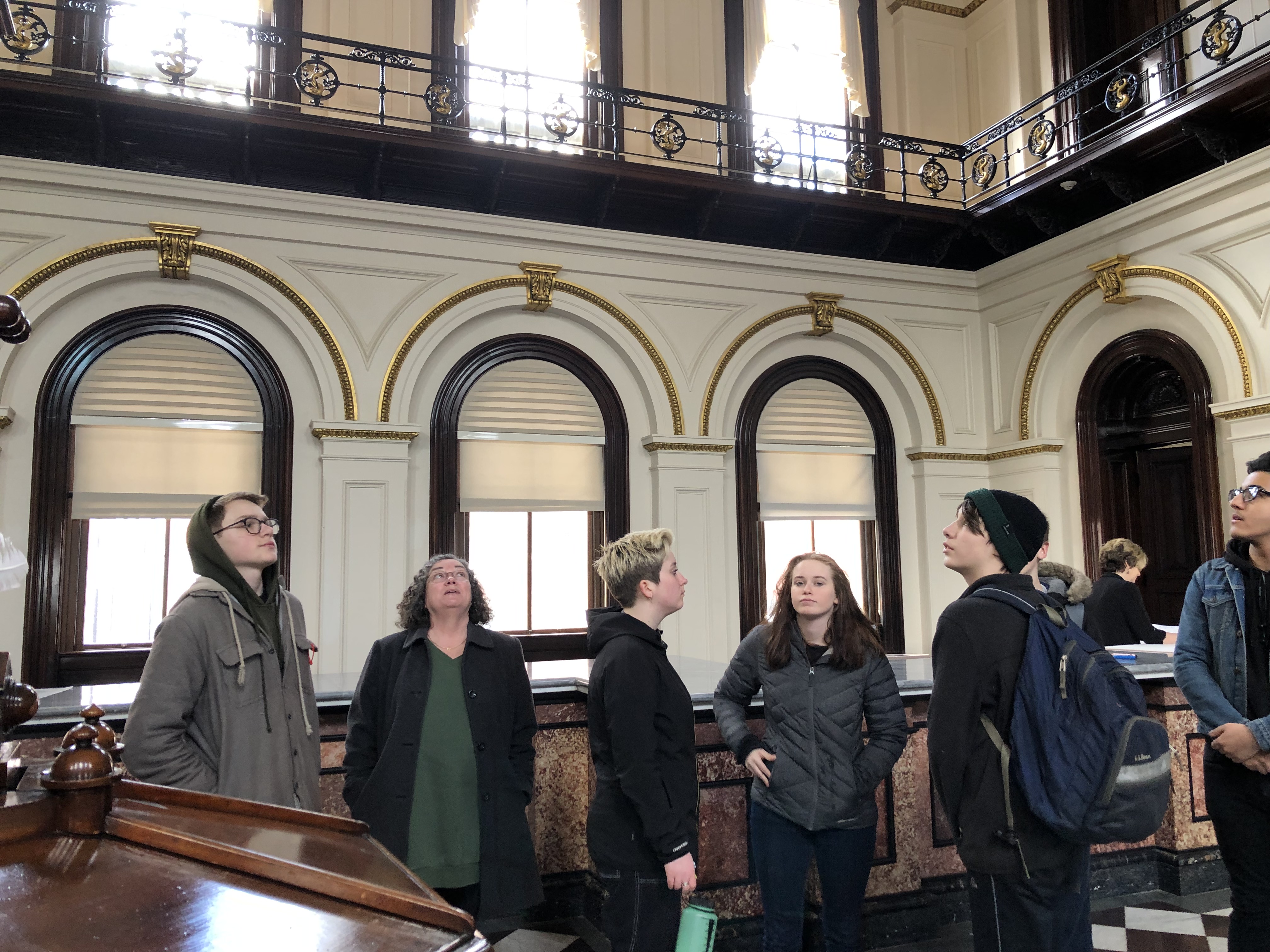 Partnering with Students to Expand the Mansion’s Educational Offerings Gallery

Partnering with Students to Expand the Mansion’s Educational Offerings

In 2013, Victoria Mansion launched a school program for elementary school learners entitled A Century of Change. This program, allowing teachers to choose from 8 topics to tailor a lesson and visit for their students, has proven to be a successful model. We look to expand this programming, yet find the needs of middle and high school students are very different from the 3rd and 4th graders we currently serve. To reach the challenging middle school audience, Victoria Mansion and Casco Bay High School in Portland partnered on an "intensive," where students from the high school devoted 5 class days from [...] 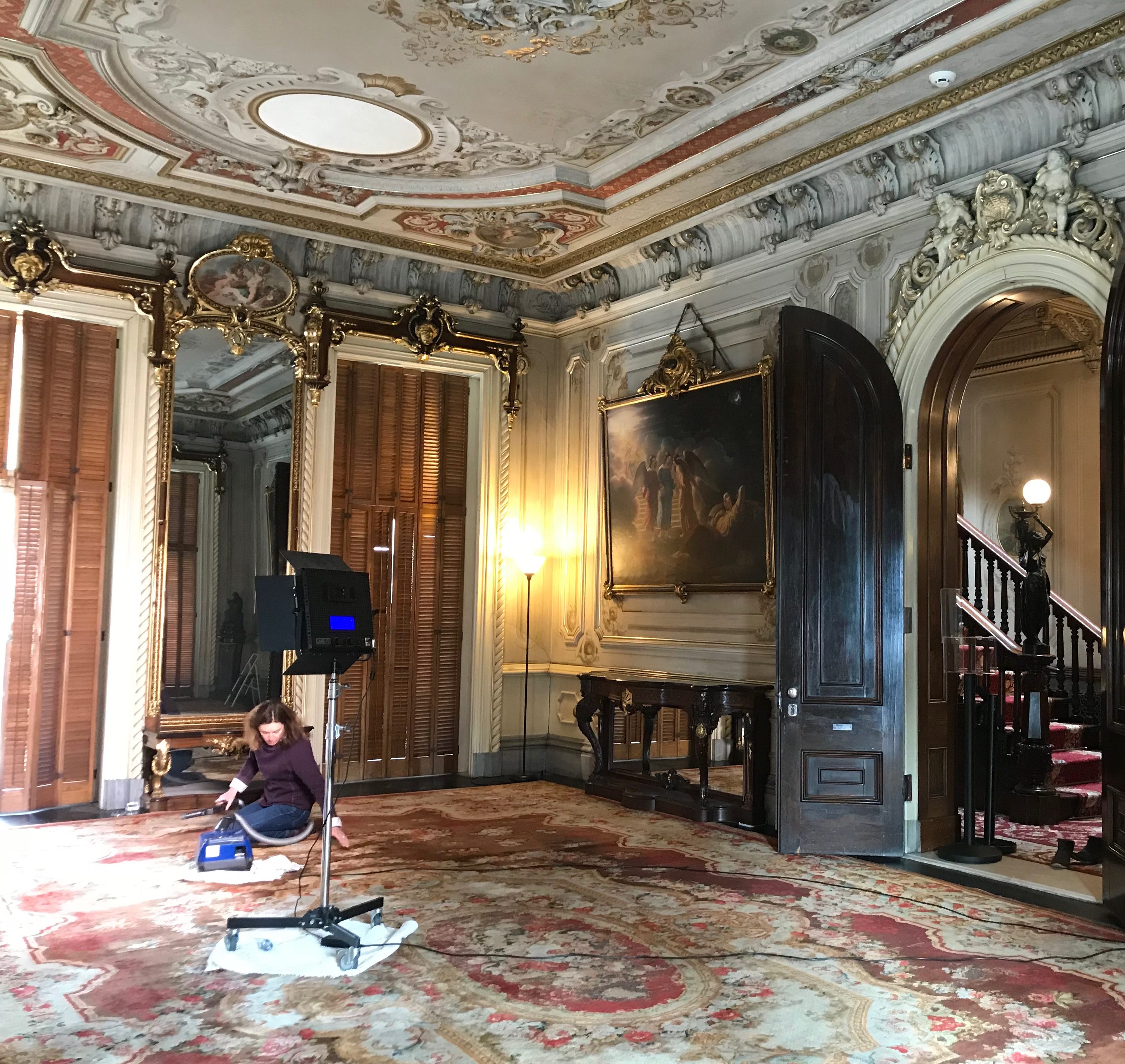 Conservation Update: Pulling the Rug Out from Under Us! Gallery

Conservation Update: Pulling the Rug Out from Under Us!

With only a few short weeks left before the Mansion opens for the season May 1, conservators are busy prepping for the major conservation project in the Parlor. The room's gasolier and furniture have been removed and relocated elsewhere throughout the house, and the original carpet will soon be rolled and rehoused to make way for scaffolding. There are also plans to relocate the two major paintings in the room, Jacob's Dream by Luther Terry and The Iconocolasts by Emanuel Leutze, upstairs to the Green Bedroom. Meanwhile, conservators are also hand-stitching a 17 by 20 foot pad to reinforce and repair the original carpet [...] 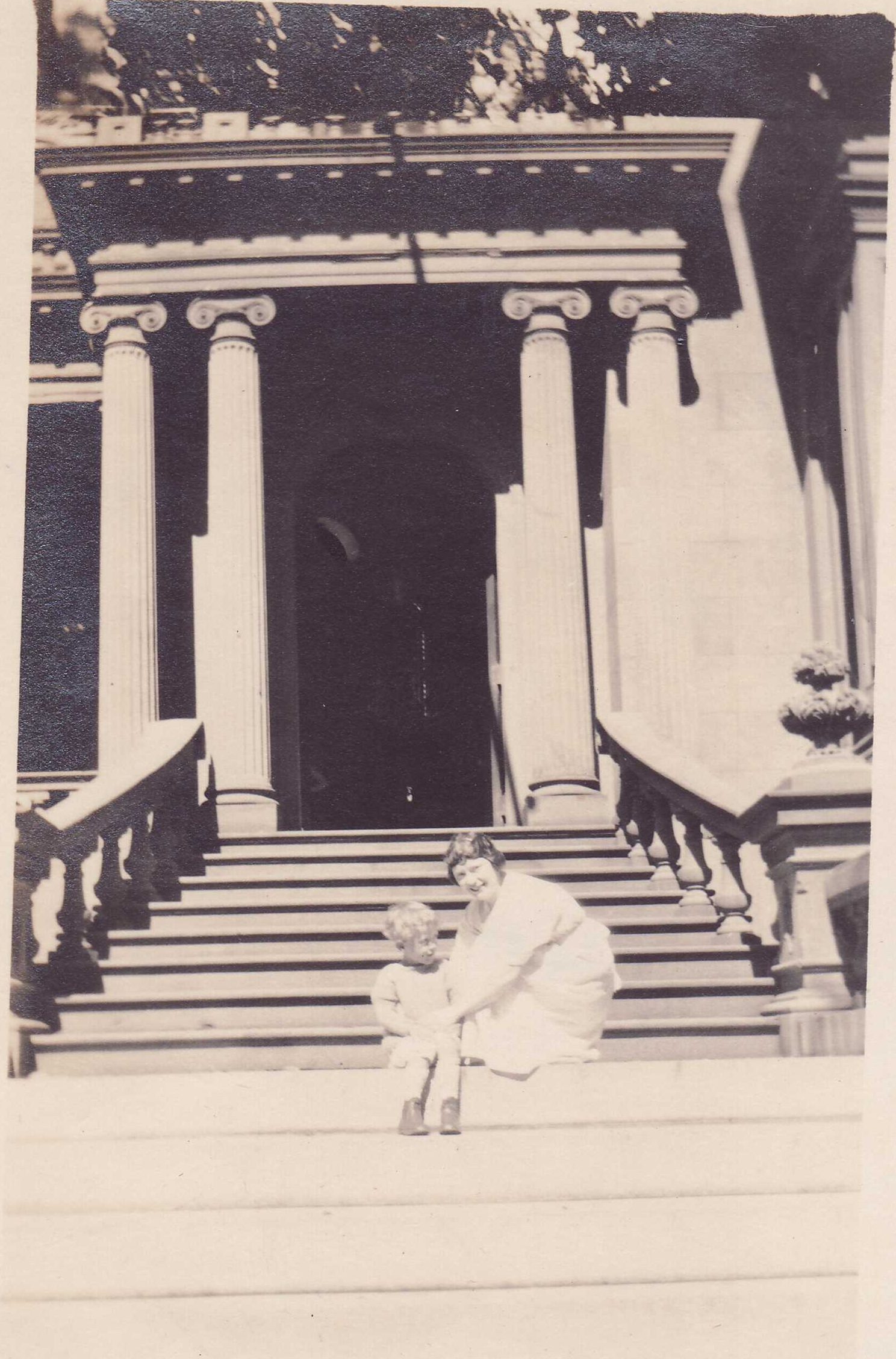 Shedding Light on the Mansion’s Servants and the Irish Connection

In recent years there has been an increasing interest in servant life at the Mansion. Last fall, our Celtic Storytelling programming included traditional Irish tales that the house's servants might have delighted in around late October. This May, we look forward to opening a new space in the Mansion to include the house's employees in our interpretation. What little is known about the servants has been primarily pieced together from census records. However, these records are by no means comprehensive since most of the servants would have listed other residences as their permanent addresses. What follows is perhaps a microcosm of the [...] 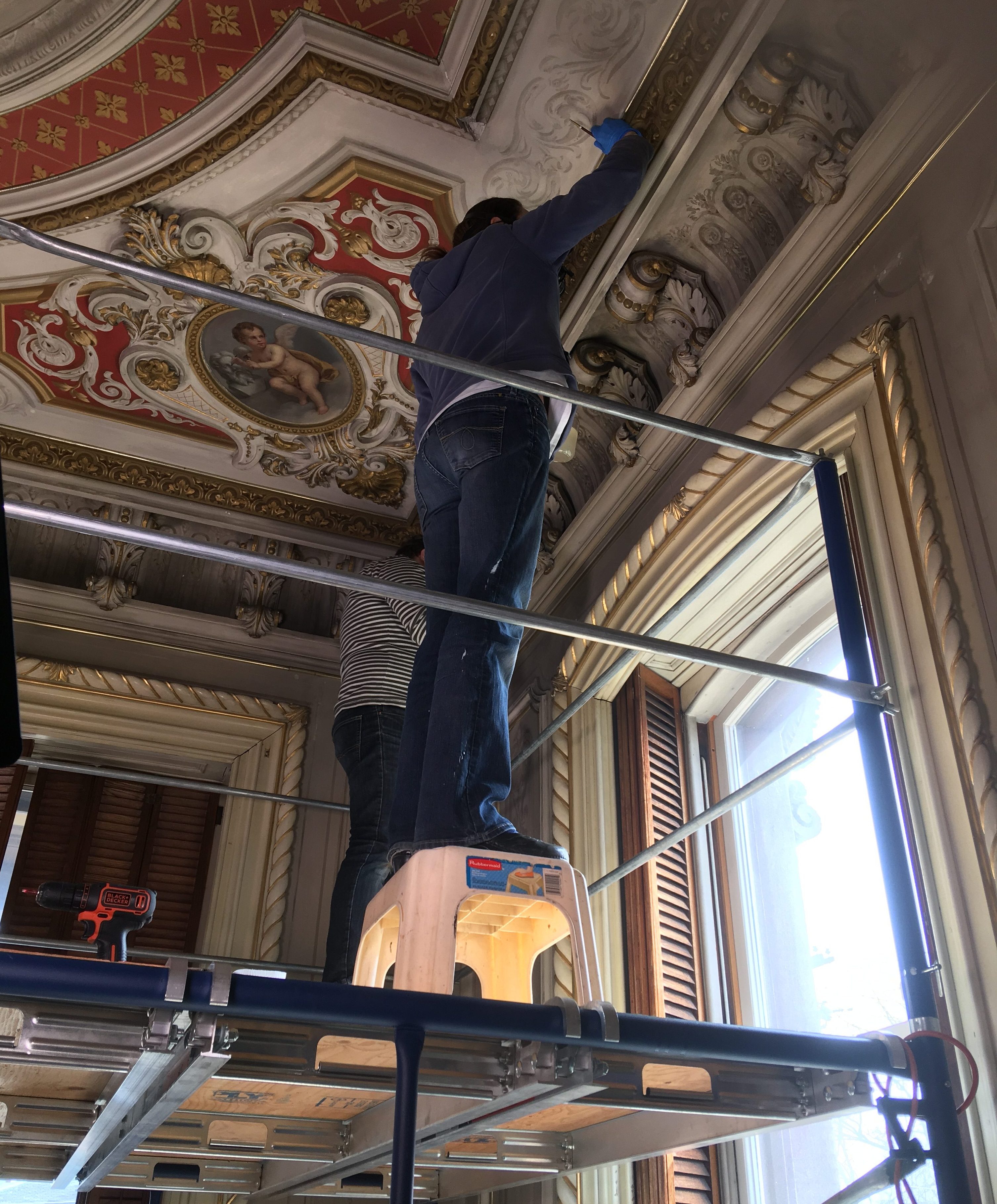 After months of preparation and planning, including the safe removal and relocation of all furniture and furnishings from the Parlor, conservators have officially begun work on the room's walls and ceilings. After a detailed surface cleaning, conservators are now in the process of re-adhering flaking and damaged paint and gold leaf. Once this step is completed, they will then remove disfiguring soot and grime that has been accumulating over the last 160 years, much of it from the Mansion's original coal furnace. Though the methodology is very similar to the recent project in the Reception Suite, finding space within the [...] 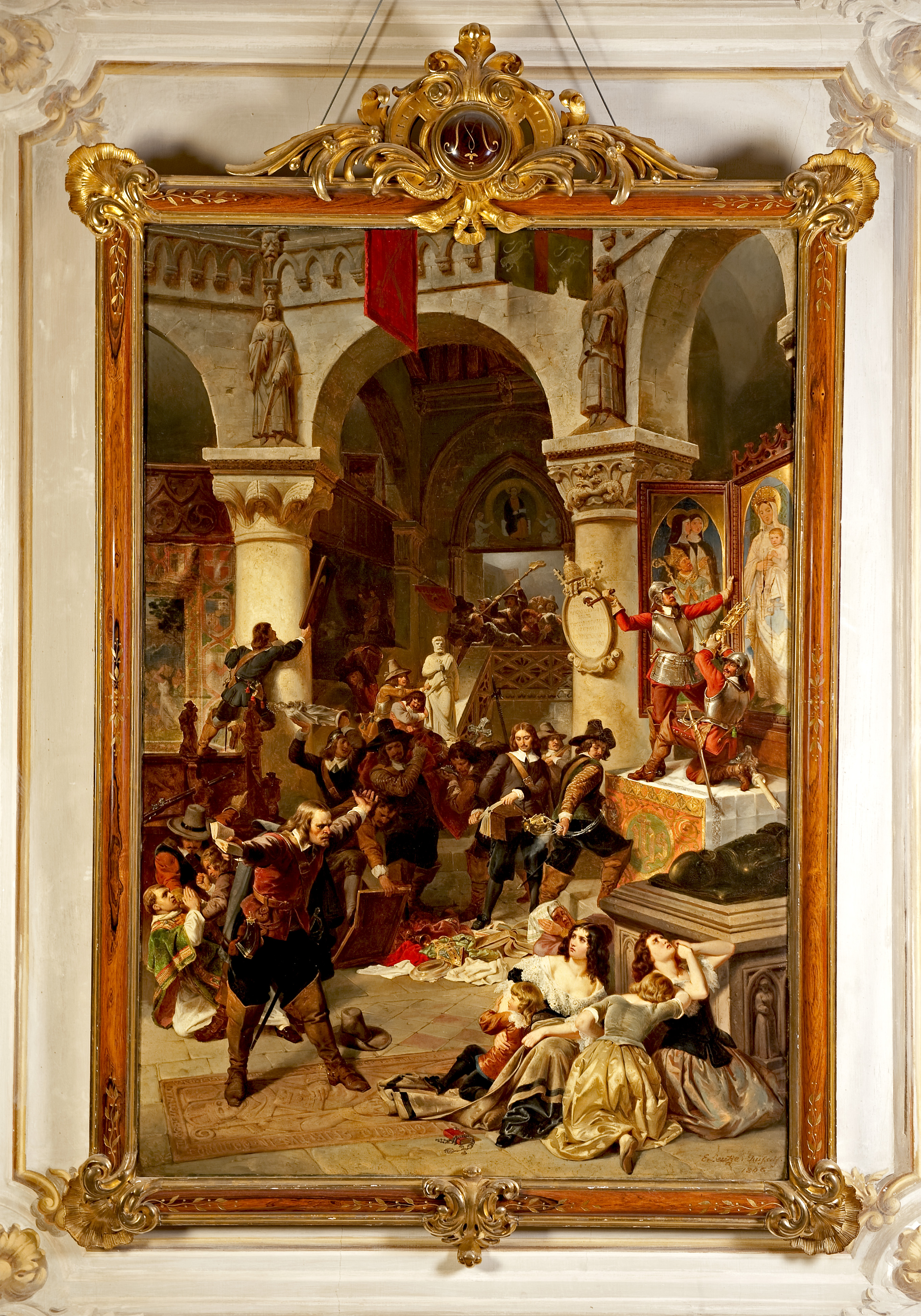 ‘The Aesthete and the Abolitionist: Ruggles Morse and Emanuel Leutze’ by Charisse Gendron Gallery

‘The Aesthete and the Abolitionist: Ruggles Morse and Emanuel Leutze’ by Charisse Gendron

In 1846, the German-American history painter Emanuel Gottlieb Leutze created 'The Iconoclasts', a large oil canvas depicting 17th-century English Protestants destroying art works in a Catholic church. The painting was commissioned by James Robb, a banker and collector then living in New Orleans. During the financial panic of 1857, Robb sold his home and much of his art.[1] As friends of Victoria Mansion know, Ruggles Morse purchased 'The Iconoclasts' and later hung it in the Parlor of his new summer home in Portland, Maine. Leutze was by then famous, having painted 'Washington Crossing the Delaware' in 1851. The painting "caused a [...] 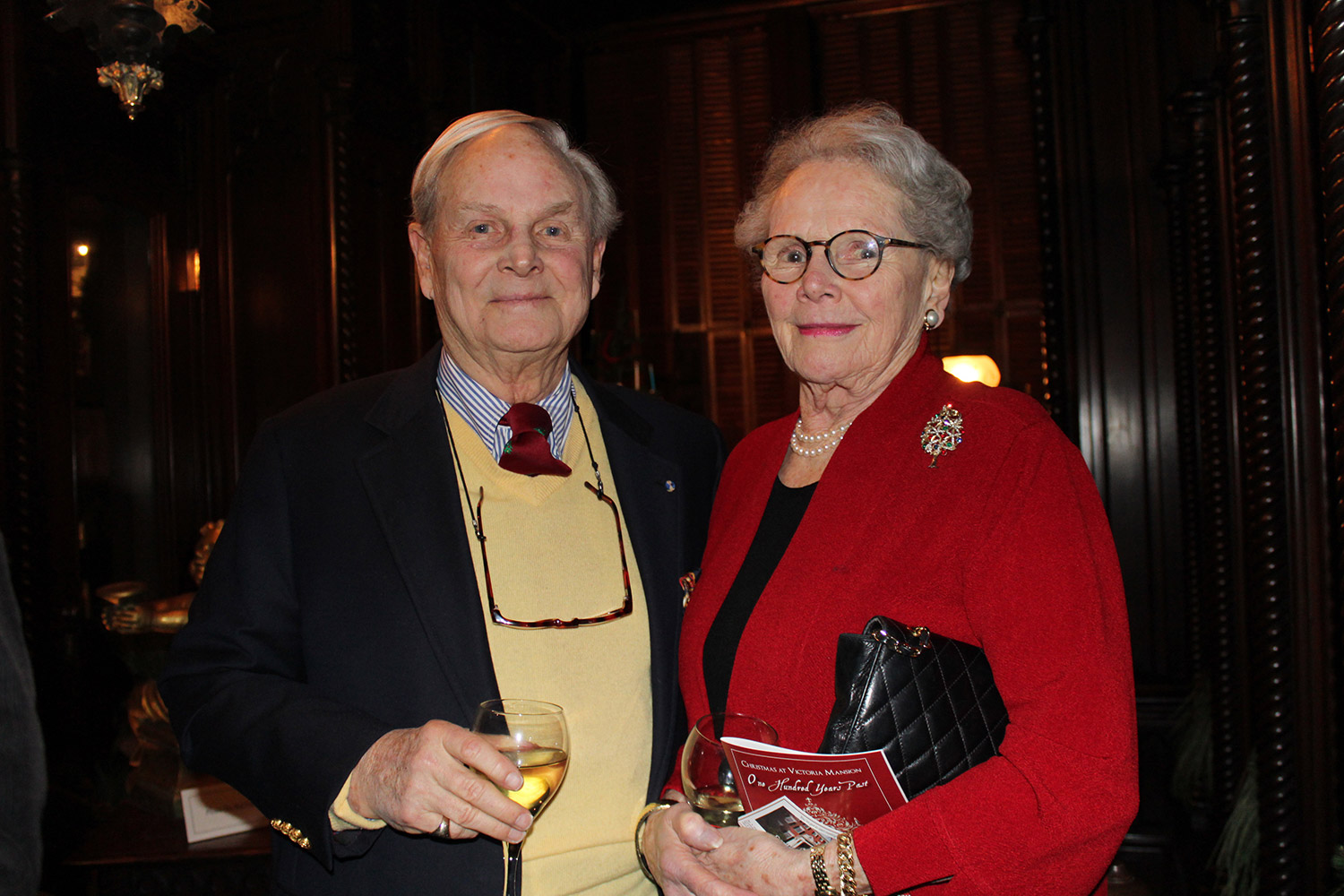 The Mansion lost a very dear long-time friend and supporter in John J. Evans III (Jack), who passed away peacefully surrounded by his family on February 16. Originally from Lancaster, Pa.,  Jack attended the Lawrenceville School, where he met his future wife of 67 years, Noreen Blakely. Jack later graduated from Wesleyan University and the Graduate School of Banking in Wisconsin before studying at N.Y.U. and Harvard Business School. He also served during the Korean War and received a direct commission upon deactivation to continue as an officer of the New York Air National Guard. Jack spent his entire professional career with [...] 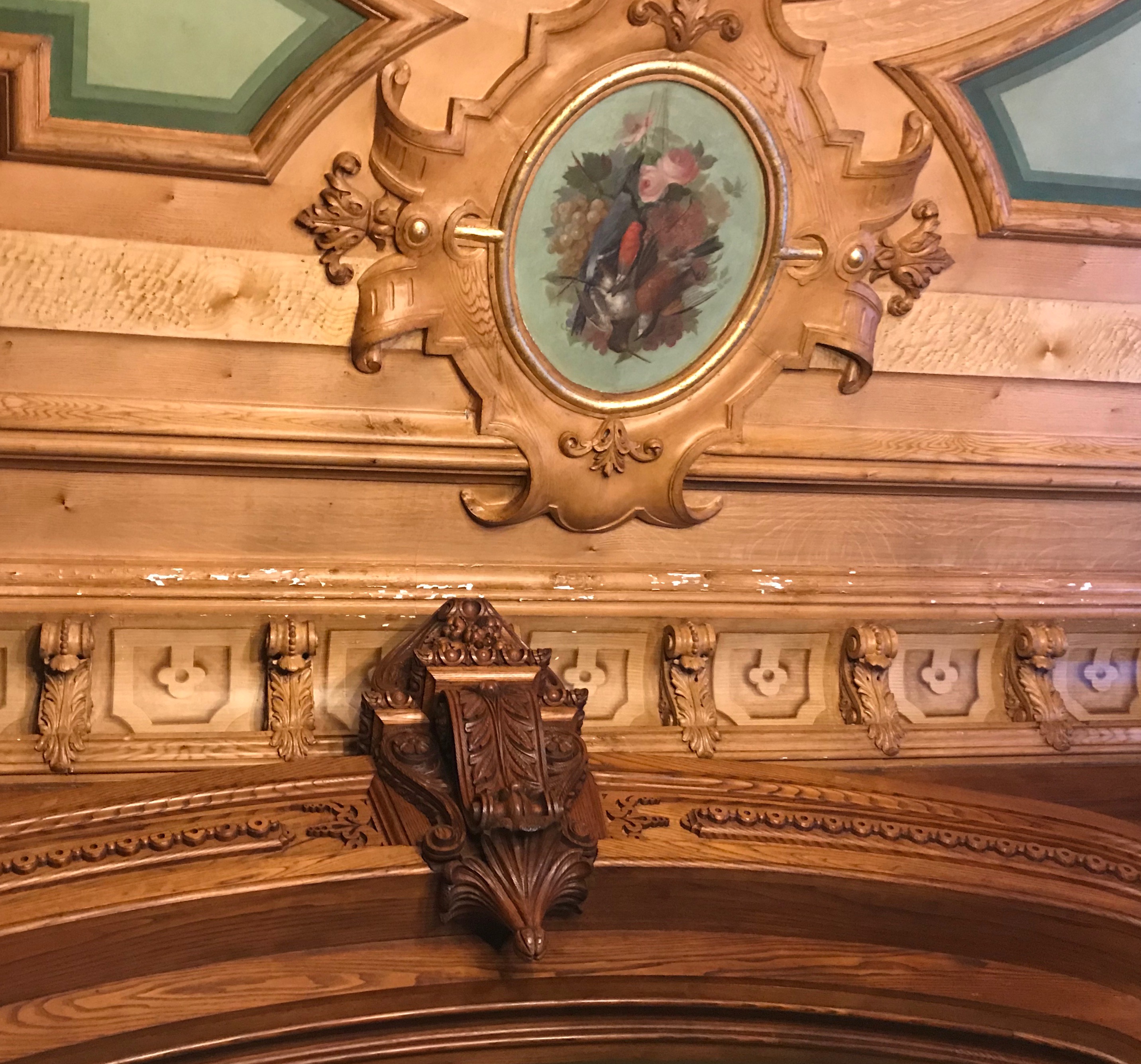 While strides are being made in our major projects, we also have smaller upkeep projects in the planning for the off-season. Last conserved and restored in the late 1980's, some may have noticed the tromp l'oeil decoration on the Dining Room ceiling has exhibited paint loss and flaking for some time. This month, conservation staff will be re-adhering flaking paint and retouching the past work done to the masterful faux paneling by original Mansion artist Giuseppe Guidicini. Be sure to check out the newly conserved ceiling when the Mansion opens May 1 and stay up-to-date with this and other exciting [...] 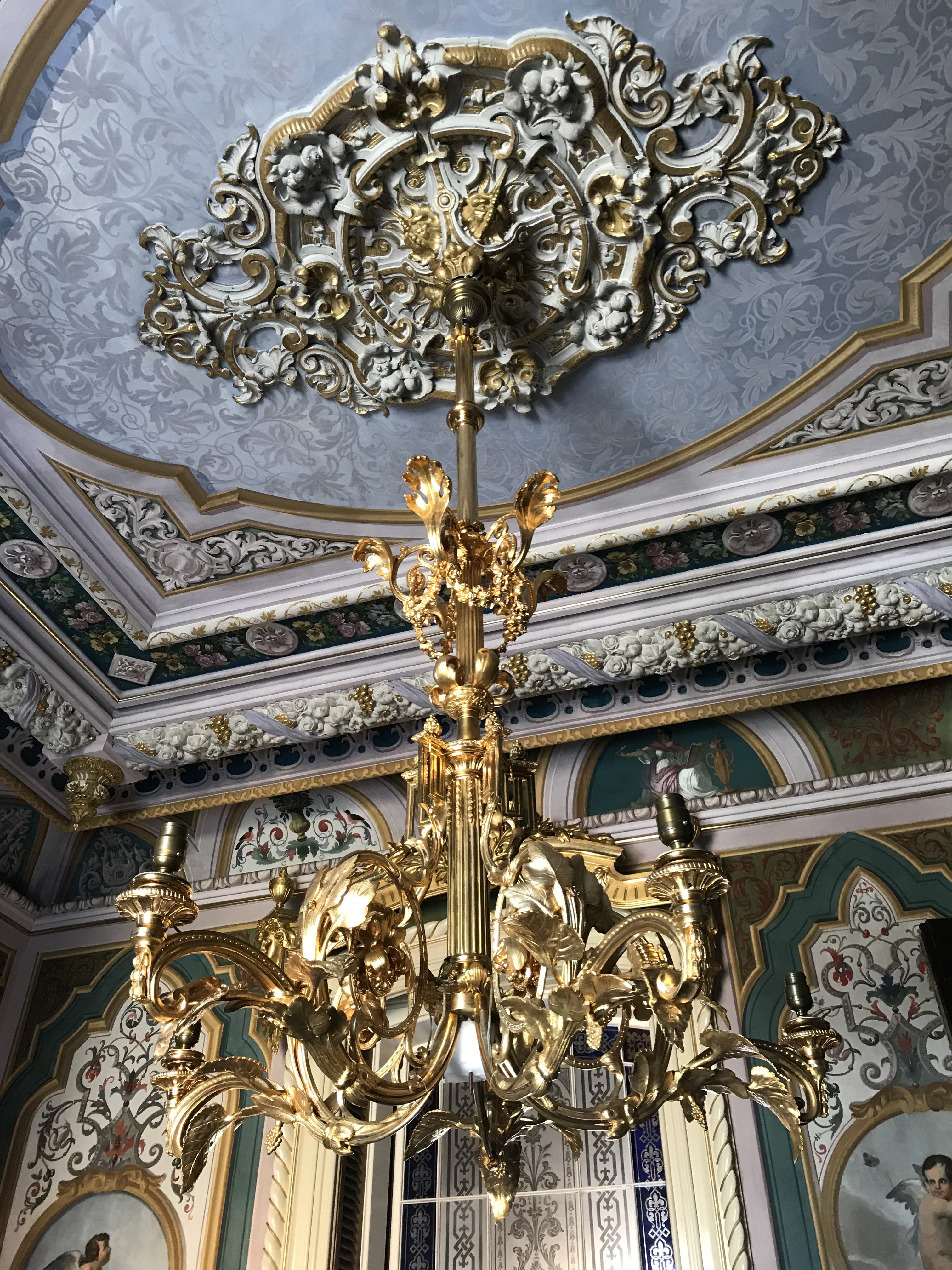 With the excitement of the Christmas season now behind us, Mansion staff shifts focus to the two major conservation projects in the Reception Room and the Parlor. One recent advancement was the re-installation of the Reception Room's gasolier (originally gas-powered lighting fixture), and the de-installation of the Parlor's. The Reception Room's remarkable 250 lb. gasolier, comprised of more than 200 individual parts, was taken down over three years ago while conservators worked on the room's walls and ceilings. Last month with the assistance of the Wilson Moving Company, the fully cleaned and conserved fixture was reinstalled in its proper place. Concurrently, the massive [...]