Sugar and Spice, and All That’s Nice: ‘Reproof’, by Edward Russell Thaxter

Nineteenth-century American artists looked to Europe as the omphalos of culture. The painters flocked to Paris, while the sculptors migrated to Florence and Rome, where they could obtain the marble, the mentors, and the ancient models they required to fashion their neo-classical compositions. These expatriate artists chose “’ideal’ subjects—themes from literature, mythology, and history,” as most worthy of their endeavors. Their studios were destinations for Americans on the Grand Tour, and often they made multiple versions of a piece to sell.

A member of the Italian enclave was Edward Russell Thaxter, a young sculptor from Yarmouth, Maine, who opened a studio in Florence in 1878. Thaxter’s career was cut short when he died of a fever at age 24, but his best-known work, a marble group titled Reproof, shows his potential. He made several copies of the piece; one is in the collection of The Smithsonian American Art Museum. Another was purchased in Italy by the aunts of Hattie Brazier Libby, the wife of Ralph Libby, who grew up in Victoria Mansion. In 2008, Hattie and Ralph’s daughter, Ellen Libby Lawrence, donated the sculpture to the Mansion in her parents’ honor. 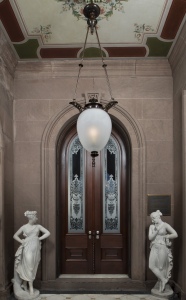 Many contemporaries of Thaxter imitated Antonio Canova, an Italian sculptor of the previous generation who epitomized the Neoclassical style. Gracefully posed, with polished surfaces, Canova’s figures are themselves inspired by ancient renderings of mythical characters, such as Aphrodite, Athena, Apollo, and Dionysus. The dancing women in the Mansion’s foyer are Canova copies. But Thaxter’s sculpture, although highly finished in the Neoclassical manner, does not represent a mythical subject, but rather a contemporary domestic one. As described by The Smithsonian,

In Reproof, a young girl sternly scolds her cat, who has just attacked a bird’s nest. She clutches the cat to her chest and looks at it disapprovingly, while waving her hand in discipline. Meanwhile, a dead bird lies at her feet and feathers hang limply from the cat’s mouth.

In Reproof, a young girl sternly scolds her cat, who has just attacked a bird’s nest. She clutches the cat to her chest and looks at it disapprovingly, while waving her hand in discipline. Meanwhile, a dead bird lies at her feet and feathers hang limply from the cat’s mouth.

Thaxter created an image that is more aligned with Victorian probity than with the carnality of the ancient gods. The savage little cat, which claws at its mistress’s dress (revealing her bloomers!), has indulged its appetites and must be corrected. “This scene,” continues the Smithsonian, “is a prelude to the responsibilities of motherhood: the young girl who is now reprimanding her cat will have to ensure that her own children are well behaved in the future.” 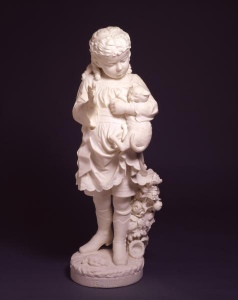 Many Victorian art works and artifacts, especially those for women and children, aimed to teach comportment while charming with elegance and gentle humor. Like the little girl in Reproof, popular culture of the period mingled bossiness with roses, buttoned boots, and neat curls. There is a somewhat infantilizing aspect to such objects, as if they hummed reassuringly, “just a spoonful of sugar helps the medicine go down.” Moral tales for children, writes M. O. Grenby, “were set in familiar environments—middle-class homes, nicely kept gardens . . . which would maximise the reader’s identification with the characters and their dangers and dilemmas.” But the stories’ appealing form did not hide their didactic content. “The values being taught were . . . commercial qualities like hard work, thrift and honesty; moral virtues like solicitude for others; social virtues like politeness, charity and obedience to parents . . . . “

Ah, yes, obedience to parents—and, correlatively, the management of offspring. Like the miniature mother with her unruly charge in Reproof, the Victorians “believed that a child must know right from wrong in order to adhere to the strict moral code as an adult. As such, consequences were freely given for those children who did not follow the rules”. And the rules for females and males were distinct. “Underlying these representations of young protagonists were adult values that clearly demarcated and endorsed gendered constructions of childhood,” writes Susan P. Casteras, “whether of demure girls or mischievous boys.” In the art of the period, “often girls are cast as mother surrogates, peacemakers, and observers, their passivity in contrast with the stereotyping of boys, who are more typically shown as feisty, independent, and contentious.”

Whether the little miss of Reproof entirely fits this sugary stereotype is another question. Today at Victoria Mansion she resides in Olive Morse’s sitting room, where Ralph and his brother Harold slept during the Libby period. This placement, in a room painted with flowers and devoid of classical imagery, is fortunate. The young lady in buttoned boots is spared the embarrassment of nymphs in inadequate drapery. And should the rowdy spirits arise of any “mischievous boys,” full of snips and snails and puppy dogs’ tails, she would see to it that “consequences were freely given.”