‘History Catches up to the Morses’ by Charisse Gendron

Ruggles and Olive Morse foretold the future of archaeology in featuring the myth of Leda and the swan in their Dressing Room, adjacent to a Bathroom styled after the frescoes at Pompeii on the second floor of the Mansion.

Queen Leda’s ravishment by the god Zeus, in the form of a swan, is one of the most enduring Greek myths. The Romans incorporated it into their own mythology, in which Zeus became the god Jupiter. Artists of the Italian Renaissance recounted the tale in prose and painting. In turn, during the Renaissance revival of the nineteenth century, Europeans embellished stately rooms with images from the ancient world. Taking a page from the continental style book,  scenic artist Giuseppe Guidicini painted a vignette of Leda and the swan in the innermost sanctum of the Victoria Mansion, the Dressing Room of the master suite.

Remarkably, the Mansion was located in Maine, not Tuscany, in a time and place noted for its strict morality. This was the era of New Englander Anthony Comstock, after all, who was to found the New York Society for the Suppression of Vice and who militantly opposed contraception, pornography, prostitution, gambling, and women’s rights. Fortunately, Ruggles and Olive Morse took a broader view. Eluding the hysterical application of Christian morality to the arts, they enshrined Bacchus and his revelers, Venus and her son Cupid, celebrity couple Jupiter and Juno, Amalthea and her goat, and, yes, Leda and the swan in frescoes and statuary throughout their summer home. What is more, they expressed their tolerant, epicurean sensibility in a marvelous bathroom, where dolphins, fountains, birds, and butterflies disport against a background of rich “Pompeii red” and “Pompeii blue” pigment.

The famous frescoes buried in the first-century eruption of Vesuvius, unearthed in the mid eighteenth century, greatly impacted Western architecture, painting, and decorative arts for the next hundred years. The influential German archaeologist Johann Joachim Winckelmann praised the Pompeiian style, and the institution of the grand tour of Europe allowed many travelers to see the frescoes first hand and return home as enthusiastic neoclassicists. It is very likely that Olive and Ruggles Morse themselves visited Pompeii.

So all the pieces were there, in the Morses’ master suite. But the puzzle didn’t snap into place until around Thanksgiving of 2018, when the inevitable occurred: A fresco of Leda and the swan was discovered at Pompeii.

The image dwelt in a house that probably belonged to a freed slave eager to demonstrate his social mobility—not unlike the self-made ‘richling’, Ruggles Morse. As reported in The New York Times, “Antonio Varone, a former director of the excavations at Pompeii, and the author of a book about Pompeian erotic art, said that sex was seen as ‘a natural impulse’ in ancient times, and that in many cases, homeowners ‘sought to entertain guests’ while showing off their erudition”. The Morse’s guests may never have glimpsed the sensuous painting in the couple’s dressing room, but surely it entertained the hosts. 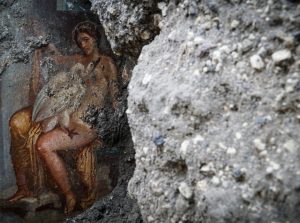 An ancient fresco depicting Leda being ‘ravished’ by Zeus in swan form was unearthed in a bedroom of a house under excavation in Pompeii, Italy. Credit Cesare Abbate/Pompeii Archaeological Park, via Agence France-Presse — Getty Images 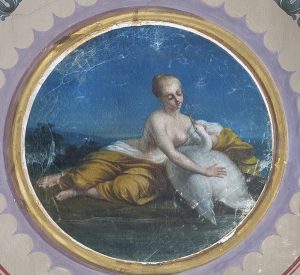 Canvas painting attributed to artist Giuseppe Guidicini of Leda and the Swan in the Mansion’s Dressing Room. Photo by Gail Dodge